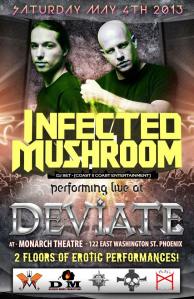 This past weekend I went to the event above at The Monarch Theater  The concert was great, and Infected Mushroom kicked ass.However, at the after party I noticed some things that really made me crazy and I want to go ahead and point out some big mistakes when playing at a dungeon party.

First: Never touch anyone without their consent. I don’t care if they are currently being fucked (as one girl was). That does not make them a slut, nor does it make them easy. They are not yours to touch. CONSENT is important.

Second: Someone that shouldn’t have even been at the party grabbed my riding crop and hit a girl he didn’t know. So unless you have permission, hands off other people’s toys! No, you can not “barrow it for a second” you enormous douche bag.

Third: Read the rules. To be fair, Devious Minds productions only had the rules for the club in ONE secluded corner and no one really gave a lecture before the play party started about behavior. Personally I think you don’t belong at a dungeon party unless you’ve looked into the rules for that sort of thing beforehand, but I also think Devious Minds could have done a MUCH BETTER job of making the rules available.

I understand that a party like this will always attract one or two assholes, but when someone is able to take their camera out and take a video in a closed play party without consent of the people involved, the security is not doing their job and the people involved are not doing their job. I had to call out several people on my own because no one who put the party together or who worked there was doing anything to stop all the bad behavior. 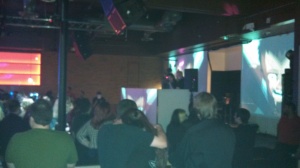