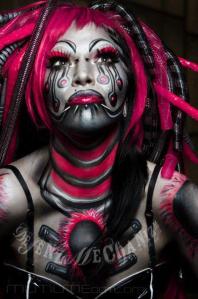 So I went to a Horns and Halos event over the weekend. It was Fetish Prom 2013. I have to say, it was a really killer party. One of my very favorite bands, Hardwire, played the prom. And the headliner was a band called Hanzel and Gretyl. I hadn’t heard of them before, but they were pretty good. There were performances by all kinds of cool people, like Defenz Mechanism. There was so much good stuff that it’s a little hard to describe it all. I guess that’s the best way to really describe a prom- it’s sensory overload of kink.

I loved the vendor section with so many whips and chains to look at. The Violet Wand demos amused me to no end, since I brought my favorite pet and he loves electricity. The venue was comfortable, though I prefer indoor events. Club 910 Live was not the best location ever, but it wasn’t bad. The crowd was full of beautiful people, and there were even suspensions by Steve Hayworth. 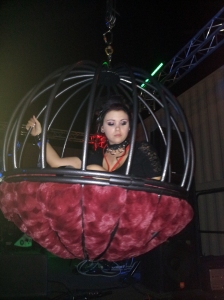 Girl in a cage

When people in other countries or even other scenes outside of Arizona ask me to describe a Fetish Prom as I know it, the best I can do is this:

Whatever your fetish is, you will get to see some of it at Prom. People in cages, people suspended by hooks, people being beaten, music, strippers, and a whole lot of amazing costumes and outfits. A Fetish Prom is a chance to check out all the aspects of the fetish community and see what you like. It’s also the Disneyland of kink, because you can try things. Pet got put in a cage, hit on stage, electrocuted, and many other things. He ran around like a kid in a candy store trying everything, which is exactly what Prom is for.

Beatings on the side stage

I have never seen anything like Arizona Fetish proms anywhere else. I have seen wonderful gathers of cool people, and been to great munches and dungeon parties and all kinds of things. There is a lot of great kink stuff out there in the world. But Prom is something different. It’s huge. It’s over-the-top, and it’s amazing. I won’t even get into the after party here. That’s a whole other story. For now, I just want to thank James Bound and all of the good guys at Horns and Halos for another great night of crazy, kinky fun!