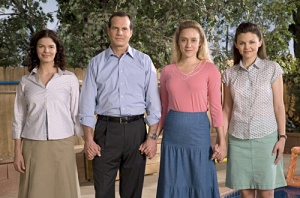 I recently had someone tell me that I should watch “Big Love” because I am Poly. Obviously I was insulted that my lifestyle was compared to the abusive relationships that some Mormons promote, but I agreed to “keep an open mind” and watch it anyway.

Big Love is about an oppressive system of control imposed by a faction of the Mormon religion. All of the Mormon religion teaches women to shut up and obey, and so I hate it in general. But in specific, those who follow the polygamy path are awful. They kick boys out of their homes when they are 14 or 15 because they don’t want them to get interested in  the girls. And the girls they marry to old, misogynistic men who are often decades older than them.

So for the record, I am deeply offended by everything to do with this show, even before it was compared to my lifestyle.

There are so many differences between the kink style of poly love and the Mormon idea of it that I hardly know where to begin. I guess I should note that kids and religion are not necessary parts of the poly lifestyle for kinky folks. For me personally, I can not have children and I am not religious. Those things do not factor at all into my life, even a little. Also, when poly people choose to have children, they think it through, They’re not tying to overrun the earth with children of their religion. They’re not breeding for the sake of breeding. Poly couples do not think of children as tools in a war against Satan. They think of them as tiny people, because that is what they are.

The show is centered around religion, and they live their lifestyle because they believe in a god who wants them to have an unnecessary amount of children. I can’t tell you how horrible I find that. Those poor women!

Also, while the show is centered around the historical Mormon practice of a man having multiple wives, all the wives are expected to be monogamous with their one husband. Some kink couples may choose to have a poly/monogamous relationship. But it is a choice not a requirement, and it is the exception rather than the rule. Poly life usually means freedom for BOTH partners; not just the man.

(I did have one poly/monogamous relationship. He just didn’t seem to be able to find any other girl that would date him. Poor thing. But I wasn’t going to let that stop me from living MY life. It lasted nearly a decade and I think we were both happy, though he sometimes struggled to manage his jealousy.)

Anyway, if you’ve ever read Escape by Carolyn Jessop, you know that Polygamous compounds are full of unspeakable abuse. They make it look cute in the show, but it’s NOT. I am from Arizona and I have seen boys come through the shelter I volunteered at after being run off the compound in Colorado City. Not only were these boys uneducated and afraid, but they missed their families, who tossed them out like trash so they wouldn’t “steal” the young girls in the compound.

Meanwhile women are only dumped in the desert after they have had all the children they can. Often once they reach menopause a husband will decide they are useless and just drive them off the compound and leave them, forbidding them to come back or see their children. And because these folks give birth at home and don’t file birth certificates with the state, the women have no way to prove that they even have children, (nor any money to fight a court case.)

I actually can’t list all the ways that this show glorifies a horrible and abusive lifestyle. I can’t begin to describe my revulsion at the abuse in Colorado City and other Mormon Compounds in Mexico, the USA, and Canada. But I must insist that being a Mormon Polygamist is NOTHING like my lifestyle at all.

In the kink community, we are all equal. We all deserve respect. And I think none of us would support the lifestyle depicted in “Big Love” for the same reason we don’t support the relationship described in “50 Shades of Grey;” because we don’t tolerate abuse. Our object is to be open-minded, not closed-minded. And I think that is a worthy goal for anyone, kinky or not.