Not all kinky folks are poly. in fact, most are not. The poly community is still very small, as it’s not yet all that socially acceptable. The concept of monogamy as an ideal is still very prevalent, even as many people fail to live up to it.

In spite of this, I find myself drawn to write about these issues because they effect my life so directly. And one of those issues is being ethical.

It’s not okay to be poly and not tell people, because misleading people isn’t a nice thing to do. And this can lead to a lot of rejection. People will be interested in you and seem very keen to get to know you better, until you disclose the fact that you are interested in them as an addition to your life, rather than as the center of it.

In a place with a large community like Portland, Oregon; this is not nearly as much of an issue. Sex clubs and swingers parties are normal there, and so no one thinks less of you if you’re looking to find a second or third partner in addition to the one you already have. On my recent vacation to Portland I visited Ron Jeremy’s Club Sesso for a Twisted event (Sort of a kink night) and saw plenty of couples interested in poly experiences. 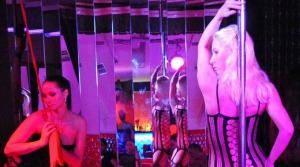 However, in a smaller community it’s much more difficult to find people who will be accepting of alternative lifestyles. And this can lead to the temptation to lie. I admit, I have thought about it. It wouldn’t be hard to do. Casually dating someone, it’s entirely possible to never mention my husband and just sort of let them assume that I am interested in a monogamous relationship with them.

And that would be unethical.

So, I tell everyone I meet and am interested in dating that I am married and we are poly. This involves a great deal of judgement. Also, I am about 95% certain that none of the people I have told believes me. I get the feeling they are all sure I am simply cheating on my husband, and that he doesn’t REALLY know I’m on dating sites. (Which is funny because we run into each other on the dating sites we use- as we obviously would since we are looking for the same sorts of people.)

I wish I could give my fellow poly folks an easy way around this issue. I wish there was a way to determine in advance which people are comfortable with this sort of thing, so as to avoid the constant shaming I endure when explaining my lifestyle. However, as of yet, I have found no solutions.

I guess I just want to say that, even when it’s hard, it’s very important to be ethical. Don’t lie, don’t cheat, and don’t mislead unsuspecting folks. Ideals mean nothing if we abandon them when we are challenged.

Also, when I say I moved to Guam, people often ask me where the hell that is. Here’s a map to help you: