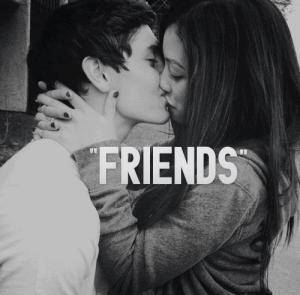 I try to always keep in touch with people who have meant a lot to me. And in particular, anyone who I have had sex with. After all, the many men and women who have had sex with me have seen me with my guard down. They know things and understand things about me that others may not. Plus, I think it is a sign of being a mature adult when you can handle seeing your exes socially.

And yet, not too long ago I told one of them to fuck off.

His name was “Pretty;” a nickname given by my friends because he was stunningly beautiful (and in their mind it was his only positive feature.) He and I had dated for the better part of 15 years. However, I refused to ever make him a primary because he was volatile and unpleasant around others. He mostly didn’t date other people at all for the 15 years he and I were together, and I mostly kept him as my “honored second.” (I did take a break a few times when he got really nuts.)

Over the years, I put up with him refusing to see a psychiatrist in spite of his problems. If I had to guess, I would diagnose him with Narcissistic Personality Disorder, Borderline Personality Disorder, and Anxiety. But of course, we will never know since he wouldn’t talk to someone. I watched him alienate everyone who tried to befriend him or date him for 15 years, and I patiently caught him when he fell. I even bought him a motorcycle and rented him an apartment when he failed at providing for himself. I paid his bills sometimes when he was short now and then, too.

However, he lied to me and betrayed me.

In my mind, that was that. I grieved for the relationship, and I let it go.

And then I told him no.

And you know what?

It was the right thing to do.

Yes, it was hard. But the thing is, he never did anything but throw tantrums in public, ask for money, and make poor decisions. And in the end he betrayed me in spite of all of my kindness. I realized that some exes should not be invited back into your life. Some of them really shouldn’t have been in your life in the first place.

The truth is, you can’t “fix” people, and you can’t help anyone who won’t help themselves.

It’s too bad, but that’s the end of that. Goodbye “Pretty.”

One thought on “Staying Friends”